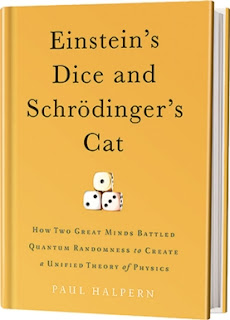 Secrets from the Einstein Archives

Even today in the internet age, nothing matches the special thrill of browsing through boxes of historical materials. In contrast to their image as stuffy places fragranced with moldy papers, archives and libraries are secret theaters full of some of the most riveting dramas. They house materials as funny, sad, or jolting as anything Broadway and Hollywood have conjured up.

I vividly remember sitting in Firestone Library in Princeton some years ago, browsing through materials from the Albert Einstein Duplicate Archive, when I encountered a curious exchange between Einstein and Austrian physicist Erwin Schrödinger. While the bulk of Einstein's original letters and writings are housed at Hebrew University in Jerusalem, copies exist throughout the world, including at Princeton. The Einstein Papers Project, currently based at Caltech, has published a number of volumes of work from the first half of his career and digitized some of that material. However, the box of correspondence I was examining had yet to be published.


In it, I was startled to see a folder of press releases and press clippings from early 1947, in which the two physicists were battling over the importance of a "theory of everything" that Schrödinger had proposed. Schrödinger's boasts and Einstein's put-downs were as sharp as anything said in the famed boxing rivalry between Muhammed Ali and Joe Frazier. The material was truly riveting. How did the close colleagues end up in such a heated press war?

The jolting notion that two Nobel Prize winners would end up in an international press battle spurred me to take a sabbatical leave from my university and document Einstein and Schrödinger's friendship, their quest for a unified theory of nature, their mutual fight against quantum incompleteness (that let to the famous Einstein Podolsky Rosen thought experiment and Schrödinger's cat paradox), and the unraveling of their partnership. I discovered a tale with much humor and pathos that offered considerable insight into the promises and pitfalls of scientific collaboration. After many months of further research the result was a book, "Einstein's Dice and Schrödinger's Cat: How Two Great Minds Battled Quantum Randomness to Create a Unified Theory of Physics".
Posted by Paul Halpern at 6:46 PM 2 comments:

1. Einstein did not flunk mathematics. In fact, that was one of his best subjects in school.

2. Einstein was not measured to have a high IQ. We don’t know what his actual IQ was, by current standards. History does not record him ever taking an IQ test. Also, the scoring for intelligence tests has greatly changed throughout the years.

3. Einstein as a schoolchild did not confront an atheist teacher about his belief in God. There is a widely shared story about such an encounter that is simply a myth.

4. Einstein did not win his Nobel Prize explicitly for relativity. The Nobel committee cited his description of the photoelectric effect when awarding the 1921 prize.

5. Einstein was not the “father of the bomb.” He played no role in developing it, except for urging Roosevelt to monitor the nuclear situation in Nazi Germany and take precautions.

6. Einstein never stated that quantum theory was wrong. Experimentally, he thought it yielded accurate predictions. Rather, he stressed that it had many logical gaps that need to be filled. In other words, quantum theory, in Einstein’s view, was incomplete, rather than incorrect.

7. Einstein didn’t always have a rumpled, wrinkled, shock-haired appearance. Strange as it seems, many people can’t picture him in his youth, when he was described as being an attractive man with dark hair, probing eyes, and a muscular build.

8. Einstein’s theories weren’t always right. In the early decades of the 20th century, his contributions were monumental. From the 1930s until the mid-1950s, not so much.

9. Einstein wasn’t always sticking out his tongue, despite the classic photograph. He once called himself a “photographer’s model” to poke fun at the paparazzi.

10. Einstein wasn’t just a “brain;” he had a broad range of interests, including music and sailing.

For more about Einstein, check out:

Order your copy now of Einstein's Dice and Schrödinger's Cat
Posted by Paul Halpern at 7:53 PM No comments:

I'm delighted to announce that my new book Einstein's Dice and Schrödinger's Cat: How Two Great Minds Battled Quantum Randomness to Create a Unified Theory of Physics is now in production and available for pre-order through Basic Books and Amazon.  It is about the deep friendship between Albert Einstein and Erwin Schrödinger, their mutual dislike of quantum randomness and incompleteness, and their quest for a theory of everything.

Introducing young children to science history offers a way for them to understand the scientific method and the process of discovery.  Ideally, they can learn that science doesn’t always take a linear path, and sometimes there are stark reversals.

Take for example, the discovery of Pluto, its classification as a planet, and its reclassification in 2006 as a “dwarf planet.” Clearly the definition of planets has taken twists and turns throughout the years.

I recently completed a book project with illustrator Vance Lehmkuhl with the goal of presenting the history of Pluto’s discovery and demotion, as well as a brief history of the discovery of the Solar System’s planets in general.  More information about the book is at:

What's the Matter with Pluto? The Story of Pluto's Adventures with the Planet Club
Posted by Paul Halpern at 10:32 AM No comments:

Why did scientists such as Albert Einstein and Linus Pauling work tirelessly for peace?  My new op-ed piece for the Inquirer argues that an understanding of our place in the universe can help foster global harmony:

Earth: Our Tiny Enclave
Posted by Paul Halpern at 9:12 AM 3 comments:

Join me on Shindig for an online interactive discussion

On Thursday, December 6, from 3:00 to 4:00 pm EST I will be conducting a live interactive discussion on Shindig about Edge of the Universe and cosmology.   It will be your chance to ask me  questions about dark matter, dark energy, the holographic principle, time travel, dark flow, black holes, the fate of the cosmos, or anything else you've ever wondered about the universe.  Join me with your text or video questions!